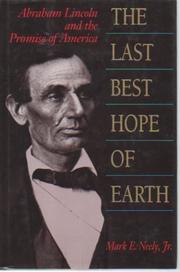 THE LAST BEST HOPE OF EARTH

Abraham Lincoln and the Promise of America

Smoothly written and solidly researched biography by Pulitzer- winning historian Neely (Saint Louis University; The Fate of Liberty, 1991, etc.—not reviewed) that focuses particularly on the moral dilemmas and accomplishments of Lincoln during his presidency and years in public office. Opting to view his subject strictly as an adult rather than in his formative years, Neely also presents a public rather than a private Lincoln, accenting the political abilities that took him first to the Illinois legislature as a Whig in 1834. An expansionist in favor of economic growth and of building his state's infrastructure, Lincoln gave little thought then to the issue of slavery that would come to dominate his career. But after a term in the House of Representatives and a period of diminished political activity, he joined the new Republican Party to run strongly against Stephen Douglas, painting him as a co-conspirator in an imaginary plot to expand slavery to all territories and states (and showing competence in devious methods of voter manipulation as well). Elected President in 1860, Lincoln quickly took charge as commander-in-chief, making up for his lack of military expertise by keeping a firm hand on his generals while pressing them to take the initiative when appropriate. A believer in the colonization of freed slaves rather than racial equality, he nevertheless pushed forward with his Emancipation Proclamation as an essential first step, while at the same time adopting measures temporarily limiting civil liberties in order to draft enough soldiers to win the war. A challenging perspective on one of America's cherished heroes, depicting Lincoln as a consummate politician, more determined than scrupulous, without diminishing the magnitude of his achievements. (One hundred illustrations)