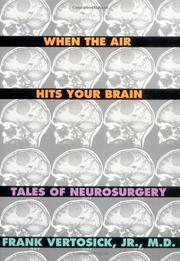 WHEN THE AIR HITS YOUR BRAIN

Well-told tales from the operating room by a thoughtful, almost humble neurosurgeon. Rule one of neurosurgery, ``You ain't never the same when the air hits your brain,'' appears to have a corollary: You ain't never the same once you've held a human life in your hands. Vertosick describes his evolution from apprehensive third-year medical student on a six-week neurosurgery rotation to competent chief resident of neurological surgery and finally to practicing neurosurgeon. The landmarks on that journey are patients—those who were helped and those who were harmed. Although liberties have been taken to conceal identities of both patients and colleagues, and some accounts have been partly fictionalized, the aura of truth still clings to them. The operating room stories are taut and graphic. Some accounts, such as the one in which a drill designed to cut only through the skull penetrates the unlucky patient's cerebellum and the one in which a slip of the knife does terrible damage to a young man's brain, are virtual horror stories. Vertosick says he is writing about the ordinary; if so, anyone facing brain surgery must hope for the extraordinary, for happy endings are not the rule here. Babies, young mothers, athletes, old men—all are vulnerable to genetic defects, accidents, aneurysms, or tumors that no surgery can correct. Sometimes a life is saved or a person is returned to wholeness, providing the author with the gratification that keeps him in his demanding profession. Writing with humor and compassion, but without sentimentality, Vertosick shows us that neurosurgeons, those gods of the operating room, are humans, too. His book can be tough reading for those who prefer to keep their illusions intact.