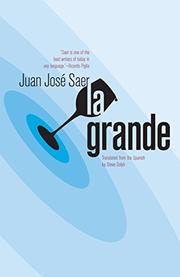 This final novel by the renowned Argentine writer (1937-2005) is a daring, idiosyncratic work that examines the idea of an individual person navigating the whirl of random events that helps shape everyone's lives.

Nula, 29, is a wine salesman, philosopher and philanderer, a combination which makes him a perfect subject for Saer’s scrutiny. He's working on a book about becoming, which, viewed as a lifelong project, is one of the novel’s animating concepts. As for wine and sex, both are portals to a heightened awareness of the self. While the novel ostensibly keeps to a linear narrative, stretching over six days, Saer subverts the form by placing the most important moments in the past. Five years earlier, on the street, Nula bumped into a beautiful girl in red, contingency (another key concept) at work. He became romantically obsessed by this Lucía, who was married to a doctor, but he couldn’t handle participating in their lovemaking when she invited him to. Soon after, he met and married the equally beautiful Diana, only to cheat on her with regularity. Sex is at the heart of the novel, not just the sweaty coupling but its prospect and, later, its memory, how they flood the consciousness. Memory is a third key concept. The past is ever present for Nula's witty, erudite, sexually permissive and loose-knit group of friends. Even at the end of the 20th century, the memory of Argentina’s nightmarish Dirty War still throbs; Nula’s father, a left-wing activist, was murdered during that war. Saer has challenged himself to reproduce life’s flux while arresting it, since “any object in the world can be of interest to a true philosopher.” This explains why a woman threading a needle merits the same absorbed attention as a hot date.

Dolph’s fine translation eases us through the dense paragraphs of this major addition to Saer’s oeuvre.