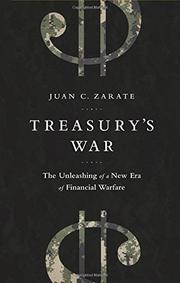 The Unleashing of a New Era of Financial Warfare

How the United States uses economic embargoes and financial tools as weapons against murderous terrorist groups and "rogue states" such as North Korea, Iran and Syria.

Zarate, a senior adviser at the Center for Strategic and International Studies, is a former federal prosecutor who joined the U.S. Treasury Department after the 9/11 attacks to figure out ways to constrict the financing of terrorist groups. Relying heavily on anecdotes, acronyms and actual case studies, he provides detailed explanations of secretive operations far less publicized than ground wars and drone strikes. He builds the saga around a small group within the Treasury Department who gather regularly to develop new policies of economic warfare, coordinate those policies with fellow government agencies (such as the State Department), and also negotiate with banks and other private-sector institutions. Although Zarate's work carries the immediacy associated with the so-called war on terror, he wisely places financial warfare in historical context, going all the way back to 432 B.C., when the Greek city-states of Athens and Sparta battled for hegemony by employing economic sanctions as part of their strategies. Moving forward in history, the author notes the economic blockage of the Confederacy by Union forces during the Civil War. Since Zarate worked on economic sanctions during his tenure in the Bush administration, he is able to provide a you-are-there sense that will quite likely draw readers into what otherwise might have been an arcane account. Zarate is a patriot but not a blind patriot. While proud of his work, he is also willing to point out mistakes in the execution of policy and shortcomings in the overall strategy of the U.S. His epilogue sets out "lessons learned" with suggestions for improvement.