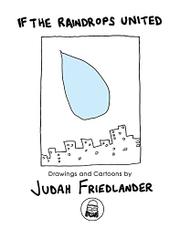 IF THE RAINDROPS UNITED

A comedian presents a series of drawings and cartoons, most of which “are comedy. But some are serious. Or just weird.”

Friedlander has been performing stand-up comedy since he was 19, but he is best known for his roles in American Splendor and on 30 Rock, in which he delivered a hilarious performance as oddball TV writer Frank Rossitano. The eccentricity and offbeat humor of that role are amply reflected in this short book, which features crudely drawn cartoons on a variety of subjects (jokes about genitalia and scenes from New York City both feature prominently). Most of the pieces are a single page, though some provide a brief story—e.g., the adventures of “Gentrification Man,” a “superhero for the rich and overprivileged who “stand[s] up for the rights of corporations.” The style and tone of these cartoons contain echoes of the Far Side, the drawings of Demetri Martin (particularly his 2011 book, This Is a Book), and some of the rougher pieces at The Oatmeal, but most of Friedlander’s cartoons are not as darkly clever as the Far Side or as laugh-out-loud funny as Martin’s. There are a few highlights, however: a panel showing two buildings, one labeled “Yoga” and the other “50 Dollar Cupcakes,” with the caption “Where to Meet Women in Manhattan”; “Novice Shopping Cart Thief,” with a picture of a man walking down the sidewalk carrying a shopping cart above his head; and “Goth Crayon Box,” a drawing of a large box of crayons with just one black crayon in it. Unfortunately, these are few and far between in a book that seems like a partial draft or a home sketchbook that will eventually become part of a more substantial work.

A more-misses-than-hits collection that will likely find a home in bathroom-reading bins.