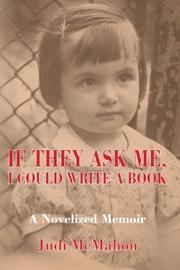 IF THEY ASK ME, I COULD WRITE A BOOK

An exhaustive fictionalized account of the author’s life and American culture in the mid-20th century.

In what she calls “a novelized memoir,” McMahon (Looking for Love in All the Wrong and Right Places, 2012, etc.) spares few details in recounting her life from her childhood in Brooklyn to the present day, via her alter ego Annie Rosenberg. From her life in her 20s among artsy friends in Greenwich Village, to a disastrous marriage (and eventual remarriage) to a Manhattan firefighter, to her struggles with alcoholism and days meditating with Indian guru Baba Muktananda at a Catskills ashram, the author delivers well-researched tales of her and her friends’ lives. Although there are compelling stories within this vast book, including her experiences as an insider in the 1950s record industry, the moments of interest often get lost amidst extraneous information. McMahon dwells at length on the backgrounds of minor characters and strings along subplots for multiple chapters before abruptly dropping them. There’s so much going on within the book’s sprawling narrative that many characters and plotlines seem underdeveloped. The book’s aim to present a complete picture of its era sometimes makes it feel like a history textbook: “The 1950s, a decade of conformity, began to change. Gene Kelly and America were singing in the rain, and Eisenhower was President.” Similarly, Annie and her compatriots’ dialogue sometimes tends more toward exposition than realistic conversation; when Annie runs into an old friend in Greenwich Village, the friend exclaims: “Hell, it’s great downtown, friendly, non-judgmental, good for finding out about life and about how to live on your own.” Overall, the novel is a pleasant read, but isn’t consistently engaging.

A sometimes intriguing but overwritten slice of American life.