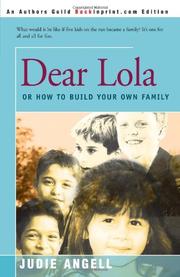 DEAR LOLA: Or How to Build Your Own Family

A junior Miss Lonelyhearts, sentimental and cute and spurious. When orphan Arthur Beniker was little, he learned such ""a whole lot about problems and feelings"" from being unloved, that at 18 he's great at solving other people's problems. He's secretly ""Dear Lola,"" author of a newspaper advice column. The column pays for him and five younger orphans--ten-year-old narrator Annie; Al-Willie, her twin; Ben, five; Edmund, nine; James, 13--to flee from St. Theresa's Home and School. They head west, on foot, spending rainy days in libraries, reading Poe, Twain, and Washington Irving. In the town of Sweet River they buy an old house. The toilet doesn't work, which gives Annie a chance to show that girls can fix plumbing. Other problems are as easily solved now that the orphans live together as they'd dreamed, as a family: Ben stops swallowing all small objects--barrettes, keys, Christmas-tree ornaments, etc.; Edmund stops throwing ""real wild tantrums. . . twice a day""; and James stops being autistic. These were just responses to not getting enough love. All but Arthur, busy with the column, go to school. Everything is dandy till busybody townsfolk inquire, who has custody? Why, Grandfather, alias Arthur. But his masquerade fails when his moustache falls off. The case goes to court. Arthur has boned up on law to be the orphans' own lawyer, but it's no use; under oath, he must reveal that he's Dear Lola. The newspapers get hold of this. Since ""people don't want. . . advice from an 18-year-old boy,"" he loses the job. Since there won't be any money, the judge refuses him custody of the others. This sets Edmund back: he throws a tantrum. His cat throws one also. This provides the diversion the orphans need to flee once again. They head farther west, in a van. ""We've been moving around California, picking fruit, living on farms. . . and we all love it."" Ah for the happy life of under-age fruitpickers. . . . This time Angell has applied her glibness to a serious subject, with disastrous results.