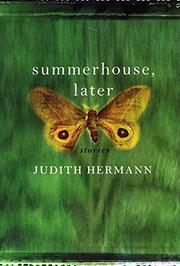 The ten stories in Hermann’s debut are said to have been a great success at home (Hermann is a Berliner), but to the Yankee ear they seem to consist, for the most part, of youth, pose, and attitude.

The exception is the fine opener, “The Red Coral Bracelet,” which ought to have been the title story. A German bride, shortly before the 1905 revolution, is taken to St. Petersburg by her husband, a builder of furnaces. Furnaces are so needed in Russia that the husband is away for years—with the result that adultery with the bride occurs, and a birth, but not before a duel, and a death. Years later, the bride’s great-granddaughter, burdened with these mixed and exotic origins—and wearing a bracelet from St. Petersburg—unburdens herself to a shrink and loses the bracelet as its string breaks and “the six hundred and seventy-five coral beads were scattered all over the room.” This wonderful Babel-esque release from history is the theme also of the title story (a Berlin cab driver buys an 18th-century manor house, repairs it, then it burns down), but the characters—ultrahip young adults—are so shallow, thin, and unprepossessing that the allegory has no emotion to take root in. Likewise, in “Hurricane (Something Farewell”), two young women visit a friend who’s gone to live on a tropical island, but the characters are so insensitive and unlikable that the story’s symbols are just exercises in air. Other pieces, too, seem more riff than depth: In “Sonja,” a strange woman becomes fascinating to a painter; an aging bachelor living in a fleabag hotel in New York meets a girl and doesn’t know what to do (“Hunter Johnson Music”); a girl seduces a famous artist, who’s a near-dwarf (“Camera Obcsura”); and a hatefully cranky old granny dies by catching on fire from a candle (“The End of Something”).

Stories, yes, but without characters a reader can care about, they remain surface only.