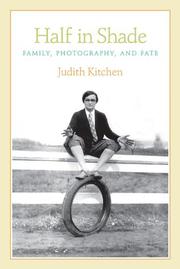 Essayist/novelist Kitchen (The House on Eccles Road, 2002, etc.) muses on memory, history and illness while rummaging through family photos.

The author writes that photos capture a physical moment, while memory re-creates the entire atmosphere: how we felt, what sounds we heard, all those things that hover out of the camera’s range. As she looks at the disk containing scanned copies of boxes of family snapshots, she is as interested in what they don’t show as what they do. Did 23-year-old Aunt Margaret, “Paris, 1938,” know that war was imminent? Why on earth would her mother be sitting at a desk with a lampshade over her head, and can she be sure it is her mother? Slowly, from these fragmented snatches of essays (ranging from a single paragraph to 30 pages), a picture of Kitchen’s family emerges: German-American immigrants on her father’s side, impoverished farmers on her mother’s. Her father, a physicist, was so repulsed by the anti-German hysteria he saw as a boy during World War I that he was a conscientious objector during WWII; her mother may have had a serious romance while visiting Europe in the summer of 1930. The section centered on photos from that trip is the book’s longest and least appealing; the author’s attitude seems punitive, as she criticizes the banality of her mother’s travel diary and faults the young woman for being insufficiently unconventional. It’s also aggravating, though clearly intended by Kitchen, that facts must be teased out from an extremely elliptical narrative: Where was the house that suffered floods in three different decades? Her father seems to have died young, but when exactly? Still, there are enough intriguing insights to maintain interest, and three meditative passages on the author’s battle with breast cancer will incline most readers to cut her some slack.

Elegantly written and intermittently perceptive, though slightly self-indulgent in form and tone.