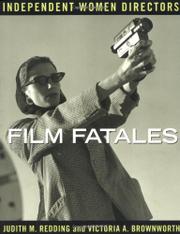 Believing ``the history of women in cinema has yet to truly be written,'' filmmaker Redding and Brownworth (Too Queer: Essays from a Radical Life, 1996) begin the task with 33 profiles of female filmmakers and moguls. They range from pioneers like Ida Lupino to popular feature directors like Jane Campion to art-house players like Su Friedrich; many of them discuss difficulties of the male- dominated industry. The reports of some are amusing, as when Alison Anders asks the studio to include her son's child-care providers in the credits for Grace of My Heart: ``I know you've never done this before, but you probably haven't had many single moms directing films for you, either.'' Others eschew the industry completely, such as experimental director Trinh T. Minh- ha. Most, like Donna Deitch, note the lack of ``equal access'' in the industry for women. Also discussed are feminism, the experiences of lesbians in film, and minority filmmaking. The profiles are earnest, often enlightening, sometimes whiny. But readers—especially film students and would-be filmmakers—should stick with it and think about the questions raised here about the nature of women's films. For example, a recurring theme of many films discussed is female identity, often rendered in terms of female sexuality. These films deal with self-definition (Donna Deitch's lesbian romance Desert Hearts), re-examination (Lizzie Borden's prostitute drama Working Girls), and cultural oppression (Pratibha Parmar's documentary Warrior Marks, about female genital mutilation). As opposed to male-directed films that define characters mainly through action, women are more concerned with exploring states of being. How do these aims affect the popularity of women's films? That the book provokes such thoughts is its best quality.