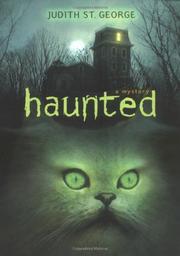 Stock 1980 ingredients, proficiently mixed. Skinny, insecure, un-confident Alex Phillips, 16, is hired--by his doubting, hypercritical lawyer father--to house-sit Red Roof Farm, a posh Pennsylvania estate left untended by the murder-suicide of Mr. Phillips' ex-clients, Baron and Baroness Von Durst. The Baron, who did the shooting, had terminal cancer. . . but did the Baroness elect to die with him? While Alex awaits fellow house-sitter Bruce Buchanan, 19 and therefore prospectively a bulwark, his doubt is fed (and he's scared witless) by evidence of unseen presences: why, scariest of all, does the Baron's German shepherd attack him whenever Alex' suspicions rise, and then turn docile when Alex closes his mind? And Alex, now companioned by clowning he-man Bruce, doesn't want to know more than he's been finding out--that the Von Dursts had a closet full of Nazi regalia and the Baroness left Red Roof Farm to an American Nazi Party. But nicely straight, also-skinny lovelight Joanna is fluent in German--and when Alex bucks up and gives her the Baroness' letters to read, the shadows disperse: the Baroness had just discovered, it seems, that she was an adopted child whose natural mother was a Jewish victim of the Holocaust; and the Baron killed her, presumably, because she'd gone ahead and remade her will (which Alex retrieves from a sudden fire). With his new self-mastery, Alex also tells Bruce off and knows he can face up to his father. Smooth enough in its way, but highly perishable.