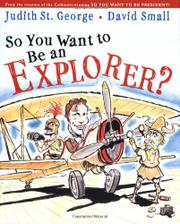 SO YOU WANT TO BE AN EXPLORER?

For young readers who don’t fancy becoming President (2000) or an Inventor (2002), St. George offers another career path—actually, several dozen paths, as under the aegis of “explorer” she includes not only such familiar figures as Columbus, Mary Kingsley, Amelia Earhart and Yuri Gagarin, but also a lengthy roster that includes the likes of test pilot Chuck Yeager, human genome mappers Francis Collins and Craig Venter, and David Kunst, who walked around the world. Readers will come away with a clear idea of what these and their fellow travelers accomplished, and when—and, more important, a sense of the courage, curiosity and other personal qualities that impelled them. She writes in an exuberant style—“Explorers tackle a quest with gusto. ‘Great’ wasn’t added to Alexander’s name for nothing. . . . ”—that Small’s larger than life, extravagantly wrought caricatures echo perfectly. First-class inspirational reading: funny, fluent and on target. (biographical “glossary”) (Nonfiction. 7-10)