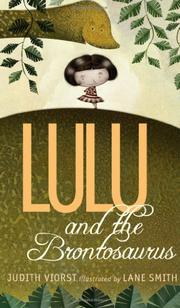 LULU AND THE BRONTOSAURUS

Viorst, better known within the children's-book world for picture books than novels, flexes her muscles and introduces readers to delightfully obnoxious, fit-throwing Lulu, a spoiled only child prone to indulging in over-the-top temper tantrums to get what she wants. And what she wants now is a brontosaurus for her birthday. Her long-suffering parents finally put their collective feet down and refuse. Lulu’s antics do no good this time, so she heads into the woods to find a dinosaur herself. In short chapters interspersed with funny narrative asides and whimsical black-and-white illustrations, readers follow Lulu as she heads into the woods, faces off with some ferocious animals and finally finds the brontosaurus, who decides he’d rather have Lulu as his pet than be hers! Lulu won’t survive this adventure without some serious changes in her behavior. Dinosaurs, it turns out, are fond of good manners. The glib narrator provides not one but three endings for readers to choose from. Even so, they still won’t have had enough of Lulu. Pitch perfect for the beginning chapter-book crowd. (Fiction. 6-10)