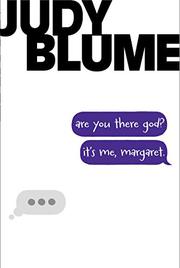 ARE YOU THERE GOD? IT'S ME, MARGARET.

The comical longings of little girls who want to be big girls—exercising to the chant of "We must—we must—increase our bust!"—and the wistful longing of Margaret, who talks comfortably to God, for a religion, come together as her anxiety to be normal, which is natural enough in sixth grade.

And if that's what we want to tell kids, this is a fresh, unclinical case in point: Mrs. Blume (Iggie's House, 1969) has an easy way with words and some choice ones when the occasion arises. But there's danger in the preoccupation with the physical signs of puberty—with growing into a Playboy centerfold, the goal here, though the one girl in the class who's on her way rues it; and with menstruating sooner rather than later —calming Margaret, her mother says she was a late one, but the happy ending is the first drop of blood: the effect is to confirm common anxieties instead of allaying them. (And countertrends notwithstanding, much is made of that first bra, that first dab of lipstick.) More promising is Margaret's pursuit of religion: to decide for herself (earlier than her 'liberal' parents intended), she goes to temple with a grandmother, to church with a friend; but neither makes any sense to her—"Twelve is very late to learn." Fortunately, after a disillusioning sectarian dispute, she resumes talking to God…to thank him for that telltale sign of womanhood.

Which raises the last question: of a satirical stance in lieu of a perspective.