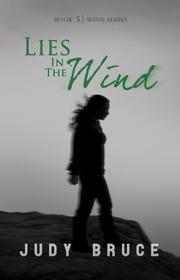 LIES IN THE WIND

A psychic small-town lawyer in western Nebraska investigates a double murder in this fifth installment of Bruce’s mystery series.

“Life calmed down a bit—I hadn’t killed anyone for several weeks.” So begins Megan Docket, 29, in describing her latest adventure. Though not a violent person, Megan just seems to invite the kind of trouble that requires lethal self-defense. A lawyer in small-town Dexter, Nebraska, Megan has a gift: She hears the voices of the dead in the wind sweeping the dry bluffs near her house and gets psychic impressions of danger, whether past or to come. She has a good relationship with local law enforcement—in one case, especially good. She’s dating Lt. Jay Young, a sheriff with the State Patrol. So when Megan is asked to look into the deaths of Junior and Val Percival, she’s allowed to thoroughly investigate. Re-experiencing the events and sensing evil, Megan is sure it’s murder by a third party, not a murder-suicide. Megan happens to be the executor for the couple’s estate, which is unwelcome news to Kenny and Helen Percival, now guardians to Junior and Val’s 15-year-old son, Mitch, who is profoundly autistic. With the help of her close-knit group of family and friends, Megan untangles snarled threads, including a family feud and insurance fraud. She also wonders whether to trust Jay and her deepening feelings, especially after a disastrous visit to his family at Christmas. Bruce (Fire in the Wind, 2017, etc.) keeps up a crackling pace in her fifth Docket novel, helping the reader keep track of a large cast through good exposition and a cast list. Megan’s psychic abilities help nudge her in the right direction but aren’t overly convenient, giving her room to demonstrate her lawyerly and investigative chops. As with the previous novels, Megan’s personality interestingly blends compassion and practicality. She’ll kill if she has to but pleads with God, “Please don’t let me be evil.” A few clever surprises keep readers guessing until a satisfying outcome.

Another fine series entry featuring a well-rounded heroine whose psychic abilities are just some of her gifts.