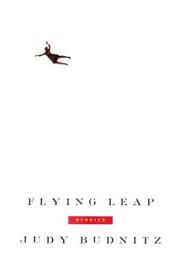 The title is apt; this nimble debut collection of 23 stories takes a variety of chances, impressing by its audacity and originality. Budnitz, a Village Voice cartoonist whose fiction has appeared in literary quarterlies, seems a kind of homegrown surrealist, launching expeditions into strange terrain from such disarmingly mundane settings as back porches, hospital waiting rooms, and crowded city streets. ``Dog Days'' has to do with a man in a dog suit who takes up residence on the porch of a Middle American family, this after an unexplained disaster that has led to the gradual dissolution of society. In weird yet convincing fashion, the family—and particularly the young daughter—begin to treat the man, who offers a remarkable impersonation of a canine, as a dog. This leads to a ghastly ending when, pressed by hunger, the other members of the family suddenly realize that, in some parts of the world, people view dog as a delectable dish. ``Guilt'' offers a grimly funny take on family guilt, carrying filial neurosis to new levels of absurdity as a healthy young man is browbeaten by his two harridan aunts into donating his heart to his dying mother—having been assured by the doctors that he can live some time without one. In ``Directions,'' a variety of figures—a middle-aged couple going to the theater, a man who's been told that he has a fatal disease, a young woman apparently haunted by a collapsed affair, two tough- talking hustlers planning a score—get lost in the city and end up seeking guidance in a dusty shop where maps are sold and, apparently, the deity works behind the counter. Each of the characters gets the help he or she deserves. In ``Burned,'' a young couple are, quite literally, consumed by their passion. Throughout, Budnitz's wry, conversational tone is nicely leavened by precise lyrical passages. A good mix, overall, of the fantastic and mordantly funny.