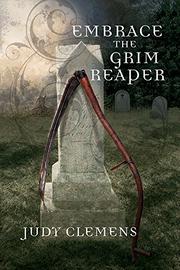 A transient tries to solve a small-town mystery with Death by her side.

Casey Maldonado is on the run from her past, trying to evade memories of the grisly deaths of her husband and son as well as the owner of the Pegasus Car Company, who may be at fault. The one thing Casey can’t escape is Death, who haunts her in physical form, disappearing and reappearing at the darnedest times and leading Casey to...wait for it...Clymer, Ohio. Death, a cross between a teenaged junk-food addict and a nosey grandmother, offers enigmatic commentary but little comfort for Casey’s survivor’s guilt. Clymer’s a small town, and Casey quickly settles in at surrogate mothers Lillian and Rosemary’s B&B while she gets to know the locals, most of them regulars at the town’s soup kitchen, Home Sweet Home. Customarily cheerful Eric Jones, who runs the place, is down in the dumps with the rest of the town, mourning the untimely demise of his girlfriend Ellen Schneider. Though her death was ruled a suicide, no one who observed her recent upbeat attitude believes that story. Can it be that Ellen had dirt on her former employers at HomeMaker, the town’s big company? Casey has to dig deep to find out what secrets this little town is hiding.

Clemens (Different Paths, 2008, etc.) features a new leading lady with the promise of depth, though her climax, whose timing seems off, could be penalized for unnecessary roughness.