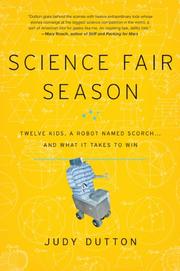 Twelve Kids, a Robot Named Scorch, and What It Takes to Win

A heart-gladdening tale of 11 students contesting for top honors in the Intel International Science and Engineering Fair.

The Intel ISEF showcases the work of 1,500 high schoolers across the globe vying for $4 million in prizes and scholarships. It is the first-stop recruiting venue for universities, research and development labs and medical programs. The quality of work is astounding; said one judge: “The level of sophistication in these projects is in many cases beyond the level of graduate school and doctoral research.” Though Dutton (How We Do It: How the Science of Sex Can Make You a Better Lover, 2009) occasionally lapses into a schmaltzy mode—“The lesson I would learn from her was that the ultimate reward for doing science fairs isn’t fame, or money, or college scholarships…It’s about connecting with the people you care most about”—there is no denying her genuine admiration and affection for the contestants. The characters include Garrett, whose project brought heat and hot water to his hardscrabble family; BB, who brought her bout with leprosy to the fore; and Eliza, the anti-nerd, a rich, beautiful model who investigated the collapse of honeybee colonies and contended with her looks as a deterrent. Dutton describes the projects with an easeful clarity, illuminating the world of “the most hardworking, humbling, and heartbreaking group of young men and women.”

It’s been a while since science nerds were true outcasts, but this group shines in the best of oddball company.