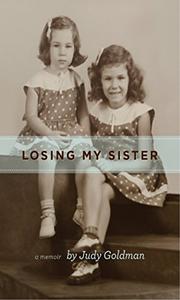 A chronicle of the relationship between two sisters struggling to “solve the mystery of individuality and connection.”

Goldman (Early Leaving, 2008, etc.) begins in 1992, with the discovery of a “mass” in her breast. When she called her sister, Brenda, the next day, Brenda told her that she felt “calcifications” in her breast. Their biopsies occurred one day apart; the author’s diagnosis was benign, but her sister’s was malignant. For Goldman, the cancer encapsulated their respective images: she sweet and prim (like her mother), her sister tougher (like their father.) She explains that as the younger sibling, she followed her sister's lead; in turn, her sister was protective. Goldman then skips back to 1974, when her mother was diagnosed with Alzheimer's. Two years later, her father suffered a recurrence of colon cancer. The stress of the situation contributed to a serious rift between the sisters, a breach of intimacy that they struggled to repair during the ensuing years. Goldman’s parents had played an important part in helping them maintain their close bond as sisters. With them gone, writes the author, she experienced a belated rebellion against her sister. In an unsuccessful attempt to repair their apparently broken relationship, the sisters even tried couples' therapy. After their mother's death, they reconciled for a while, but the cycle repeated itself. Although her sister's fatal illness brought them close again, Goldman was left bereft but determined to claim her independence.

An occasionally poignant but mostly dismal memoir of loss and its many manifestations.