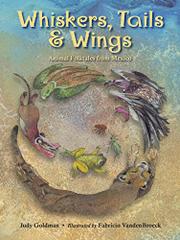 Five animated, traditional tales are enhanced by ethnographic information about the indigenous peoples who still tell these stories.

The author has selected tales not from the well-known Aztec or Mayan tradition, but from the Tarahumara, Seri, Huichol, Triqui and Tseltal peoples. Each short tale is followed by a description of the group’s traditional customs and their contemporary lives, including their use of cars and computers (and, in the Huichol chapter, ceremonial peyote by chosen adults). The stories attest to the ingenuity of the cricket, Señor Grillo, over the force of Señor Puma’s army and to the steadfastness of Mosni, the sea turtle, whose journey to bring sand from the ocean floor enabled Hant Caai, the Seri god of creation, to create land that humans would inhabit. The Huichol story explains why the opossum has a bare but prehensile tail. The humorous Triqui tale describes insects invented by their god of creation to make Man and Woman do some real work, and the last story recounts the scary encounter between a large buzzard and a small frog. The book is handsomely designed, with full-bleed acrylic-and-watercolor paintings on heavily textured papers starting off each story. Realistic vignettes emphasizing folk art and intricate clothing illustrate the informational sections. Comprehensive glossaries (with pronunciation guides) accompany each story, and a scholarly bibliography and index round out the volume.

One of the most satisfying folklore collections in recent memory. (Folk tales. 7-11)