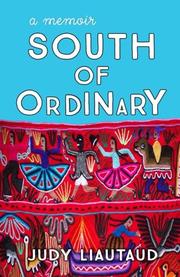 The Tension Between Love and Adventure: A Road Trip from Mexico to Peru with an Adrenaline Junkie
by Judy Liautaud
BUY NOW FROM
AMAZON
BARNES & NOBLE
LOCAL BOOKSELLER
GET WEEKLY BOOK RECOMMENDATIONS:

A woman recounts her travels across Central and South America with her former husband in the 1970s in this memoir.

It would be accurate to say this work is about the beginning of Liautaud’s (Sunlight on My Shadow, 2013, etc.) failed marriage, but it doesn’t read as such. The story and the prose don’t have a gloomy, doomed tone. It would be correct to call it a travel book, but that label also seems insufficient. This work tells a remarkable tale about a relationship in the ’70s, in which a young couple decided to travel the world with just their backpacks and their wits. In those days, there were neither smartphones nor the proliferation of travel guides geared to young, thrifty travelers. Not that the author’s ex-husband, “adrenaline junkie” Dave Rodriguez, would have used these resources too extensively. Liautaud describes meeting him while attending college in Boulder, Colorado, in 1969. She was infatuated with his carefree, daring soul and his plans to travel the globe, and she was determined to prove to him that she could keep up. The author dropped out of school and moved with Dave to his grandparents’ rustic property in Fraser, Colorado. Once Dave finally agreed to get married and they cobbled together enough money, the couple set out for Mexico. They would make it all the way to Argentina before returning home. The planning was minimal; neither one spoke much Spanish; the culture was unfamiliar; modern amenities were scarce; and the jungles had their dangers. In her latest memoir, Liautaud deftly paints a portrait of a woman fervently trying to remind herself to live in the present and not dwell on the past or worry too much about what came next—to be like her beloved Dave. It is often frustrating but all too relatable to watch this vibrant young woman defining herself by her husband, and the author skillfully explores the aspects of her past that made this approach and this man so appealing. The prose is frank, reflective, and unpretentious—of her husband’s grandparents, Liautaud writes, “They needed each other like a knife needs a fork.” The author ultimately delivers an engaging, humorous, and touching story about falling in love, flying by the seat of your shorts, and experiencing new cultures and new sides of yourself.

A moving tale about young love, stirring adventures, and self-discovery.