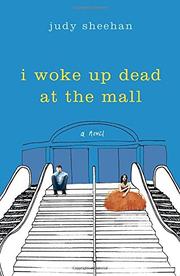 I WOKE UP DEAD AT THE MALL

A feel-good novel about being dead? Only in this quirky, even romantic story.

Sarah Evans would never be caught dead in mango, until, well, she wakes up dead in a mango chiffon dress at Minnesota’s Mall of America. The 16-year-old New Yorker, the victim of food poisoning intended for her wealthy father, finds herself among other teens, all murdered, from New York City. They become stuck at the mall while they take care of unfinished business in the living world and reconcile their feelings for their new state of being. Unlike her fellow humans (alive or dead), Sarah has a gift, called the Knowing, which allows her to foresee unfortunate events in the future. While she wasn’t able to stop her own mother’s death, she may be able to thwart her new, greedy stepmother’s attempt to kill her father. But she’ll need the help of her fellow mall-mates. Although time and socio-economics would have prevented many of them from knowing one another, they become fast friends. Sarah’s conversational, quick-paced, first-person narrative, full of “deadly” puns and idioms, recounts how she and her new BFFs (even in death?) work together. And when Sarah finds love in the process, she realizes she’s only learned how to live by being dead.