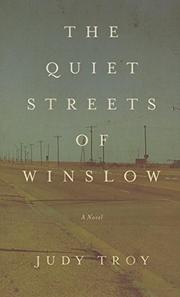 THE QUIET STREETS OF WINSLOW

Within the framework of a murder mystery set in small-town Arizona, Troy (From the Black Hills, 1999, etc.) has written a tightly constructed psychological study about a family and community.

Fourteen-year-old Travis and his younger brother Damien find a woman’s body while walking their dog in Black Canyon City, Ariz., where their father, Lee, is a veterinarian. Lee’s best friend, Sam, is the local sheriff investigating the case, which soon points uncomfortably close to home. It turns out the dead woman is Jody, a waitress whom the boys met with Lee when he took them to visit their much older half brother Nate, the son Lee had in his troubled, alcoholic youth before he became the upstanding citizen, family man and father he is now. Raised by his single mother and now in his early 30s, Nate had a rough time growing up and has become an underachieving loner who manages a trailer park in Chino Valley, where he met Jody. Drawn to her physically—as is every man she meets—and sympathetic to her grief over giving up her daughter to the Indian parents of the baby’s father, Nate let Jody live in his trailer for six months. Although he was clearly in love with her and she was giving her sexual favors elsewhere, their relationship remained platonic until she moved back to her hometown of Winslow to be closer to her mother. Nate visited Jody at least once, but no one, including the reader, wants to believe he was the murderer; certainly not Travis, who is having his own coming-of-age experience of unrequited love, or Lee, feeling guilty that he failed Nate as a father. Trying to remain objective, Sam finds navigating through the evidence particularly difficult. And soon, he finds other men who had questionable relationships with Jody and who lack alibis for the murder.

As each of the primary characters tells his version of events, Troy’s subtle but emotionally wrenching prose raises deeply provocative questions about loyalty, morality, human frailty and the power of choice.