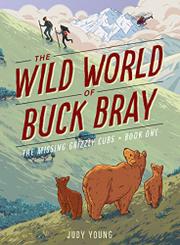 From the Wild World of Buck Bray series, volume 1

Buck Bray is about to become the star of his own new nature series, with the first episode set in Denali National Park in Alaska.

His father is in charge, Shoop is the cameraman, and Shoop’s adopted Asian daughter, Toni, is to be the “gofer.” Buck, an intrepid white 11-year-old, has a gift for getting into trying situations, like ending up (with Toni) too close to a grizzly bear. Through their own astute powers of observation and innate curiosity, Toni and Buck discover—then run afoul of—a grizzly-cub kidnapping trio. Why the criminals choose to commit the crime in the well-patrolled national park instead of almost anywhere else or even what their motivation for wanting the cubs might be are just two of the many unconvincing premises upon which the narrative dangerously teeters. Although plenty of interesting animal information is included, it doesn’t fully make up for clunky exposition and a predictable if improbable plot. Buck and Toni are likable enough, and their enthusiasm for the park is amply displayed. Along with the details of film production that are included and an exciting (if not especially plausible) climax, these qualities may be enough to sustain reader interest.

An average mystery with the added spice of danger and an engaging depiction of a distinctive and wondrous place.