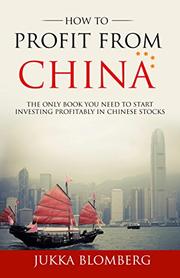 How to Profit from China

A debut primer on analyzing, buying, and selling Chinese stocks for fun and profit.

Blomberg, a Finnish author who founded and runs the website China Speculator, began investing in stocks in 1997 using money from a summer job and became interested in Chinese stocks after traveling to that country. Despite recent downturns in the Chinese economy and stock markets, he writes that the country is still an attractive speculation for those with a contrarian perspective, due to its high growth rate compared with Western countries. However, he says that investors must understand China’s changing economy, which is moving from dependence on heavy manufacturing to domination by service industries. Among the most attractive stocks in the latter category, he says, are those of companies involved in environmental cleanup, recreation, education, and culture, including Internet companies, some of which he briefly describes. But although Blomberg is bullish on China’s potential returns, he’s far from a stock tout. He takes a cautious approach throughout and warns readers that his book should serve only as a starting point for further research. He also gives advice on where to invest, saying, for instance, that companies on the Singapore stock market have been plagued with accounting scandals but may offer attractive valuations compared with those on the New York Stock Exchange, which may be safer bets but cost more. He also offers advice on how to buy, advocating purchasing securities in tranches when a stock is going up, rather than trying to get a bargain when a stock’s falling. He also provides tips on when to sell. Overall, although Blomberg says his book is for both new and experienced China investors, it will probably be most useful for the former. It offers readers plenty of investment ideas to follow up on, as well as resources for researching Chinese companies that interest them. The author gives lots of sage suggestions in this book, such as “Question everything” and “Do not argue with the markets,” which can only come from personal experience. Although there are few, if any, guarantees for any investments in modern times, his disciplined system for making profits and avoiding losses might offer readers a fighting chance.

A tightly written, succinct investment guide and a solid launching pad for anyone thinking about buying and selling stocks from China.