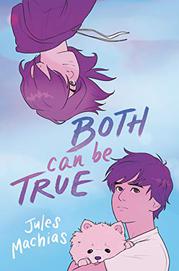 BOTH CAN BE TRUE

Told in two alternating narrative voices, the story follows Ash and Daniel, a pair of Ohio seventh graders who are on a shared mission to rescue an old dog the world doesn’t seem to have room for, a not-so-subtle metaphor highlighting the vulnerabilities faced by all abandoned souls. Throughout their growing kinship, Ash and Daniel struggle with the divergent expectations of those around them: Ash with shifting gender presentations and Daniel with his emotionality and sensitivity. Entering a new school and feeling pressured to pick and disclose a single gender, Ash’s conflicts begin with trying to decide whether to use the boys’, girls’, or gender-neutral bathroom. The school’s diverse Rainbow Alliance is a source of support, but Ash’s parents remain split by more than divorce, with a supportive mom and a dad who tries but fails to understand genderfluidity. Daniel, who has a talent for photography, is a passionate animal lover who volunteers at a local kennel and initially believes Ash is a girl. Ash’s synesthesia amplifies the tension as Ash and Daniel discover a mutual romantic interest. The novel grapples with the impact of society’s overly simplistic messages, but the characterizations at times lack depth, and there are missed opportunities to explore the subtleties of relationships. Main characters are White.

An optimistic journey of self-acceptance.