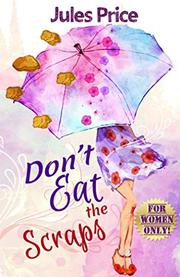 In the opening pages of this self-help book aimed at straight women, the author describes something that men often do in the early stages of a dating relationship but are “UNAWARE that they are doing it.” Price asserts that, in the first six to eight weeks of a relationship, men “throw scraps” at women—that is, they propose vague future plans that may never come to fruition. For instance, a man may say something like, “I’m thinking about going to see Pink Floyd in July. Hey, you should join me!” The author says that the man is just testing the waters of the relationship, to see how the woman reacts—but the woman assumes that the plan is set in stone. This misunderstanding results in friction, which can become worse down the line, she says. (This revelation, she says, is intended only for women, so as not to upset the “delicate ‘relationship equation.’ ”) The author also includes a fair number of personal anecdotes, mostly gathered during the heyday of dating websites, such as Match.com, in the early 2000s. Price lays out a number of “Jules’ Rules,” as well; for example, when going on a first date, a woman should never agree to a meal, as this could easily result in being stuck with Mr. Wrong for an extended period of time. Although the book initially takes some time to explicate the “Scraps Theory,” once the book gets moving, it progresses breezily, and at fewer than 150 pages, it makes for a quick read. The tone of the prose is snarky throughout (“Hell to the no!!”), but the book also offers some touching moments, which are quite memorable. Readers not only learn how Price met her husband, for example, but also how she stumbled into insights about self-confidence. In the end, the author’s “Scraps Theory” ends up being less useful than her other, more practical advice. Despite the challenges of dating, she reminds readers to “Never stop seeing the humor in life.”

A sassy advice book that provides plenty of dating sustenance.