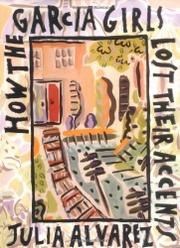 HOW THE GARCIA GIRLS LOST THEIR ACCENTS

Told through the points of view of the four Garcia sisters- Carla, Sandi, Yolanda and Sofia-this perceptive first novel by poet Alvarez tells of a wealthy family exiled from the Dominican Republic after a failed coup, and how the daughters come of age, weathering the cultural and class transitions from privileged Dominicans to New York Hispanic immigrants. Brought up under strict social mores, the move to the States provides the girls a welcome escape from the pampered, overbearingly protective society in which they were raised, although subjecting them to other types of discrimination. Each rises to the challenge in her own way, as do their parents, Mami (Laura) and Papi (Carlos). The novel unfolds back through time, a complete picture accruing gradually as a series of stories recounts various incidents, beginning with ``Antojos'' (roughly translated ``cravings''), about Yolanda's return to the island after an absence of five years. Against the advice of her relatives, who fear for the safety of a young woman traveling the countryside alone, Yolanda heads out in a borrowed car in pursuit of some guavas and returns with a renewed understanding of stringent class differences. ``The Kiss,'' one of Sofia's stories, tells how she, married against her father's wishes, tries to keep family ties open by visiting yearly on her father's birthday with her young son. And in ``Trespass,'' Carla finds herself the victim of ignorance and prejudice a year after the Garcias have arrived in America, culminating with a pervert trying to lure her into his car. In perhaps one of the most deft and magical stories, ``Still Lives,'' young Sandi has an extraordinary first art lesson and becomes the inspiration for a statue of the Virgin: ``Dona Charito took the lot of us native children in hand Saturday mornings nine to twelve to put Art into us like Jesus into the heathen.'' The tradition and safety of the Old World are just part of the tradeoff that comes with the freedom and choice in the New. Alvarez manages to bring to attention many of the issues-serious and light-that immigrant families face, portraying them with sensitivity and, at times, an enjoyable, mischievous sense.