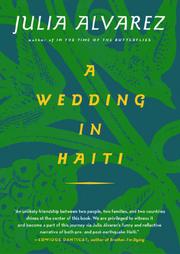 A WEDDING IN HAITI

A memoir by acclaimed novelist and poet Alvarez (Once Upon a Quinceañera: Coming of Age in the USA, 2007, etc.) about her pre- and post-earthquake travels around the island of Hispaniola and the Haitian boy who inspired them.

The author met Piti, a young migrant worker from Haiti, in 2001, on a chance visit to a coffee farm that bordered the one she and her husband owned in the Cordillera Central mountains of the Dominican Republic. Alvarez took an immediate liking to this “grinning boy with worried eyes” and began a friendship with him. She became close enough with him that she made a pledge that she would go to Haiti on the far-off, future day when he would marry—without ever thinking that she would be called upon to make good on her promise. In 2009, she received a surprise call from Piti telling her that she was invited to his wedding. Alvarez almost declined, but her attachment to the young boy won out and she and her husband returned to the Dominican Republic. As she traveled across the border, she experienced an epiphany: Haiti, though so close to her native Dominican Republic, was like the beautiful, tragic “sister” she had never fully understood. Eventually Piti called on Alvarez again, this time to help him care for his extended family in the aftermath of the 2010 earthquake. Taken together, the author’s trips to Hispaniola represent an interrupted, but no less powerful, voyage that forced her to confront her darkest imaginings.

A warm, funny and compassionate memoir.