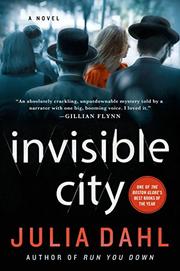 Journalist Dahl’s debut novel escorts readers into the closed-off world of Hasidic Jews in the aftermath of a homicide.

Rebekah moves to New York after finishing college, determined to become a newspaper reporter; in a declining publishing industry, all she can find is a job as a stringer for a tabloid featuring the city’s seamier side. But she soon has her teeth in a great story, one that seems tailor-made for her. When a Hasidic woman’s nude body is found in a scrapyard on one of the coldest days of the year, Rebekah immerses herself in a world that seems foreign to her—even though her mother was born into it before briefly abandoning her religious background and having Rebekah with her non-Jewish boyfriend. The case stirs up resentment in Rebekah because her mother, Aviva, abandoned her as an infant to return to the Hasidic world. As Rebekah walks the same streets her mother may be walking, she finds herself drawn into the insular lives of Hasidic women. She also comes across a surprise in the form of Saul, a Hasidic police detective, who's brought in to help question people connected to the victim. It turns out that Saul also knew Rebekah's mother. As Rebekah wades deeper into her mother’s world, she finds both brutal truths and a society that eschews outsiders. Dahl, whose mother is Jewish, does a good job of exploring Rebekah’s dilemma but stumbles with the occasional insertion of unnecessary, and sometimes-jarring, vulgar language or a sexual act into the plot. But when she sticks to exploring both Hasidic life and the world of tabloid journalism, Dahl scores a solid series of home runs.

A fascinating portrayal of a young woman coming to terms with her heritage while negotiating an unknown world.