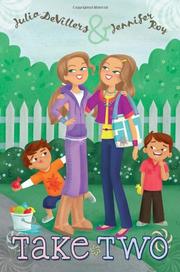 Busted in school for switching identities in Trading Faces (2009), identical twins Payton (fashion conscious) and Emma (studious), must now pay the price in this stand-alone sequel. The seventh graders think they’re getting off easy when their guidance counselor asks them to mentor her own eight-year-old identical twin boys, but the girls who fooled an entire school have met their match. It’s one lighthearted romp after another as Payton verbally spars with the school’s drama queen and self-proclaimed AcadEmma thinks she must ditch her friends to win her mathletes competition, all while curbing the antics of Jason and Mason—or is that Mason and Jason? But perhaps life is not entirely ruined when likable boys show an interest in the two girls. “Twinspired” authors DeVillers and Roy are also identical twins. They incorporate the questions twins often hear (e.g., “Do you like being a twin?”), play on the public’s stereotypes of twins with Payton and Emma pretending to speak their own language and humorously depict the girls’ tight-knit relationship. Chick lit for the tween set. (Fiction. 10-13)