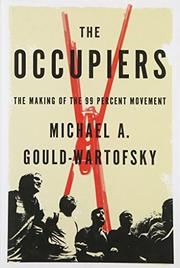 Sociology doctoral student Gould-Wartofsky debuts with an inside look at the “new, new Left” that emerged when fewer than 2,000 people seized New York City’s Zuccotti Park, near Wall Street, in 2011, sparking similar protest rallies against the wealthiest “1 Percent” in some 1,500 towns and cities.

Chanting “We! Are! The 99 Percent!” the occupiers numbered many thousands, including millennials hit hard by the 2007-2009 recession, who opposed “the politics of austerity, restricted democracy, and the power of corporate America.” Veteran activist Gould-Wartofsky was both a participant and observer at the monthslong New York action, interviewing some 80 protesters there and in cities from Atlanta to Madrid and examining the inner workings of the complex intergenerational mélange—an “awesome petri dish of political engagement,” one participant called it. The author’s sympathetic account traces the origins of the occupy tactic to events elsewhere, from the Zapatista land occupation in Chiapas, Mexico, to uprisings in Tunisia, Egypt and Athens, and describes the critical roles played by online social media and the “People’s Microphone” (where people in a crowd repeat a speaker’s works, eliminating the need for amplifiers) and by alliances with labor unions and nonprofits. Working groups provided food, shelter and safety to the Zuccotti Park encampment. Many rifts occurred, notably between upper-echelon occupiers and the “lower 99 Percent” (the homeless and drug users). Gould-Wartofsky captures the chaotic, carnivallike atmosphere that reined as chanting crowds marched twice daily on Wall Street, stormed the Brooklyn Bridge and, on Oct. 15, a day of global action in 951 cities, made their way to Times Square. The author argues the movement’s ideas and practices have lived on after the eviction from Zuccotti Park: “The 99 Percent identity—and the sense of solidarity it lent an otherwise divided Left—[was] the movement’s most enduring contribution to the political culture.”

A valuable view of the explosive movement that gave voice to outrage over our new gilded age.

THIS IS AN UPRISING
by Mark Engler
Nonfiction

THE PRICE OF INEQUALITY
by Joseph E. Stiglitz
Nonfiction