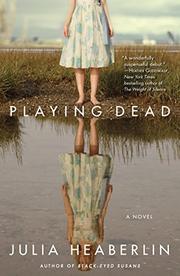 Every family has a deep dark secret. Maybe more than one.

When the letter arrives in Ponder, Texas, Tommie McCloud thinks it’s the work of a scam artist. After 42 readings of it, she’s not so sure. Could this Chicagoan claiming to be her mother, telling her that she was really the Adriana who had been kidnapped just after her first birthday, that her father was crime boss Anthony Marchetti, be telling the truth? Tommie can’t ask the man who raised her, a retired federal marshal who just passed away. The woman she’s always believed to be her mother has Alzheimer’s, and her brother Tuck perished in a car accident when he was 18. But her sister Sadie remembers overhearing a conversation between their parents that might lend credence to the letter. When Jack Smith, supposedly a reporter, pops up on the family’s doorstep to write about Tommie’s work healing traumatized kids with horseback-riding therapy, she’s suspicious. What reporter wears an ankle holster under his jeans? With assists from Hudson, a former boyfriend with lifetime access to FBI files (don’t ask), Tommie discovers ties to a girl’s unsolved murder, the slaughter years back of an FBI agent and his family, and Smith’s true agenda: confronting Marchetti, recently incarcerated in Texas. Still, Tommie’s confused about the contents of two bank vaults maintained by her mother. Deciphering their meaning will reveal more than one family secret, but not before Tommie is tailed, assaulted, shot at and finally saved by the intervention of Marchetti.