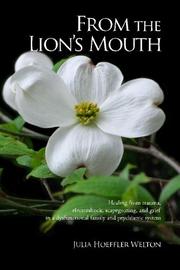 FROM THE LION'S MOUTH

A harrowing memoir of mental and medical abuse.

The teenage years are often marked by difficult, confusing physical and mental changes, which often cause minor, and temporary, family strife. When author Welton was a teenager, however, her emotionally abusive parents interpreted her normal, adolescent moodiness, sleepiness and occasional bouts of sadness as mental illness. On a trip home from college, the author was whisked away to a mental institution, where she was treated with powerful psychotropic drugs and electroshock therapy. While there, she learned to adhere to her doctors’ expectations for “improvement,” even if it came at the expense of her own individual voice and authority. Under the dubious care of a psychiatrist, she underwent 66 electroshock treatments in less than 10 years—treatments that damaged her memory and caused severe post-traumatic stress disorder. As she matured, however, she embarked on a journey to heal herself physically and emotionally, finding solace in music, religion, her academic work, the love of her friends and the sympathetic responses of caring therapists. When she was diagnosed with cancer, however, flashbacks of her previous violent, inhumane treatment made fighting the disease even more traumatic. Welton’s memoir doesn’t shy away from ugly truths about the ways that mental illness was understood and treated in the not-so-distant past, nor does it sugarcoat the experience of having two deeply miserable alcoholic and abusive parents. The author’s research also serves her well, as her myriad references to science and art give readers a well-rounded approach to a complex topic. The writing is fluid and often lovely despite the horror of the subject matter (“As Larkin hurried to turn on the oxygen, he brushed against the curtain, pulling it back slightly, and I saw a man on the gurney with a plastic mask on his face”). Overall, Welton’s search for peace and forgiveness will likely inspire others looking for ways to heal from childhood trauma.

I'M JUST THAT INTO ME
by Dayna Mason
Fiction

ONE FLEW OVER THE CUCKOO'S NEST
by Ken Kesey
Fiction