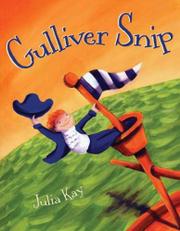 The dedication in Kay’s imaginative debut says it all: “For those who take adventures instead of taking baths.” Each night, instead of bathing, Gulliver Snip takes “a trip in his wonderful clipper ship / that his mother called the bathtub.” On this particular trip, he faces a storm, a sinking ship, a ride through a cave in a packing trunk, an island landing and getting treed by a tiger. Full-bleed left-hand-page illustrations show readers what Gulliver Snip imagines—the wooden ship, foamy green waves and his captain’s uniform. Meanwhile, smaller gray-toned illustrations above the text perfectly capture the reality—Gulliver bailing water out of the tub, bumping down the stairs in a suitcase and climbing his mother’s lamp. It is here that his mother finally discovers his escapades and trundles him off to bed to dream of his next adventure. While Gulliver’s creativity is to be applauded, parents may find it unfortunate that there are no consequences for his destructive actions. Still, a nice foray into the realm of imagination. (Picture book. 4-7)