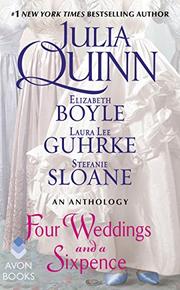 FOUR WEDDINGS AND A SIXPENCE

Four boarding school friends find everlasting love with the help of a magical coin in this historical-romance anthology that weaves through the popular wedding rhyme, “Something old, something new, something borrowed, something blue—and a sixpence for your shoe.”

Anne, Ellie, Cordelia, and Bea, friends at Madame Rochambeaux’s Gentle School for Girls, discover a sixpence in Anne’s mattress and whimsically decide that the old coin will help them find true love when the time comes. Ten years later, Anne is close to the deadline to find a husband set by her strict uncle when she meets the rakish Duke of Dorset. He agrees to help her find a husband, then falls in love with her himself and must convince her that he’s worthy. Happily married, Anne hands the coin off to Cordelia, who turns to a childhood friend to escort her to Anne’s wedding, since her aunts are trying to match her up and she’s told them she’s engaged to Kipp. Unfortunately, Kipp is an impoverished earl practically engaged to an heiress, so even though Cordelia moves him like no other woman, he can’t afford to marry her. Can he? Once Kipp and Cordelia are sorted, she gives the coin to Elinor, who is set on marrying an aristocrat whose connections may save her father from being investigated for war profiteering by the man she had once thought to marry, Lawrence Blackthorne. When Blackthorne steals the coin from her, they may have to revisit their romance, and Ellie may have to face some difficult truths about her father. Finally, Bea, a scientist at heart with no desire to marry, meets her perfect match in an injured lord who is learning to see the world through new eyes after a devastating accident.

A fun idea connects four charming stories, though they build to a pinnacle with Quinn’s.