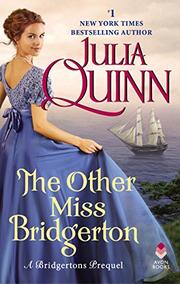 THE OTHER MISS BRIDGERTON

From the Rokesby series, volume 3

When Poppy Bridgerton stumbles upon a pirate's cave, she is kidnapped and forced to sail with the crew, then realizes the captain is not only chivalrous, but also the most attractive, interesting man she’s ever met.

Poppy has just finished her second London season “much as she’d begun it—unmarried and unattached. And a little bored.” Visiting a friend in Dorset, she ditches the maid who’s been assigned to chaperone her in order to explore some local caves when she happens on a couple of privateers who kidnap her and take her to their ship. The captain of the ship, clearly a gentleman, nonetheless refuses to release her and forces her to set sail to Portugal, a prisoner in his cabin. Poppy is angry at her lack of freedom and anxious about her reputation, but even she realizes that Capt. Andrew James is not only “blindingly handsome,” but also unusually honorable for a pirate. What she doesn’t know is that Andrew James is really Andrew James Rokesby; his role as a privateer is actually a cover for his work for the monarchy; and he and his family are close friends with her Bridgerton cousins. Andrew is impressed by Poppy’s intelligence, wit, and equanimity in the face of drastic circumstances. The more he comes to like her, the more he tries to make her journey more interesting, since she is clearly a curious soul. His good intentions backfire, however, when his desire to take her on an adventure becomes a fight for their lives just as he realizes he can’t live without her. Quinn’s mastery of banter, character development, and the slow build of romantic and sexual tension is on full display in the newest Rokesby title (a series of 18th-century prequels to the Bridgerton Regency romances). Mentions of puzzles and architecture add interesting texture to an already compelling story.