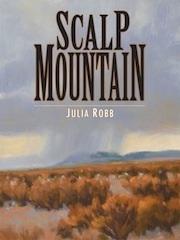 The title may be slightly misleading: While this Western takes place in the mountainous West Texas region, the emphasis is mostly on the “scalp” part. As a Texas Ranger explains to a friend’s Baltimore-born wife, when it comes to scalping, “Sister, we all do it. The rangers do it, the feuding folks do it to each other, to white folks just like them, the feathered folks all do it, I know for a fact the Comanch onest scalped a white man’s dog.” Robb’s debut doesn’t graphically describe the violence promised by this statement, but it doesn’t paper over it with any romantic notions either. There’s more here of Cormac McCarthy than Zane Gray, especially in the character of Colum McNeal, with his fierce temper and dream of settling down to breed horses. Unfortunately for that dream, McNeal is hunted by an Apache who blames him for the death of his son; and by a man who may have been hired by McNeal’s father after Colum was involved in a family tragedy. The issue of parents and sons is emphasized by Colum’s more-than-friendly interest in his friend’s wife, who is raising an adopted Apache child, the last surviving son of the Apache hunting Colum. The kidnapping and effort to rescue this child dominate the second half of the book, giving the novel a propulsive plot that some of the earlier chapters lack. But the occasionally episodic structure allows Robb to dip in and out of characters’ heads to give their points of view: No one is a villain in their own mind, and every character here has a tale to tell—often violent, potentially redemptive, at least sympathetically told. Occasional slips may bump the reader out of the story, such as when a character refers to a “hale” of bullets, rather than a “hail”; or when a horse’s “bridle” becomes a “bridal.” Perhaps the addition of a map might also help readers unfamiliar with this territory.

Deep research and empathy for her rounded characters make this Western stand out.