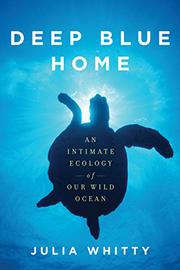 An Intimate Ecology of Our Wild Ocean

Mother Jones correspondent Whitty (The Fragile Edge: Diving and Other Adventures in the South Pacific, 2007, etc.) looks at the life of the oceans and the sea creatures she has observed over the past 30 years.

The author expresses significant concern about the fate of the many animals she has communed with, including a massive sea turtle—“straight out of prehistory…whose ancestors once shared the ocean with dinosaurs”—swimming in the Gulf of California with only a 50 percent chance of surviving in any given year because of the dangers of illegal capture, dangerous fishing gear and pollution. In the 1980s, Whitty spent two seasons on Isla Rasa, a small island off the coast of Baja California, where she assisted two scientists who were studying the behavior of falcons and the sea gulls and terns that they preyed upon. After visiting a neighboring island to observe least storm-petrels, “the smallest species among the smallest of all the seabirds,” she explains that they were probably named for Saint Peter, who, like the petrels, supposedly walked on water. In 1984, she and a partner filmed seals and small minke whales as they fished and witnessed an iceberg “slicing like a blue fluke into the air and listing in the wind before disintegrating into a debris field of slush and brash ice skidding across hundreds of yards of ocean surface.” Today, laments the author, along with the pollution of the oceans, modern fishing boats use monofilament fishing lines (with more than two billion hooks) and drift nets to catch tuna and cod, a practice that also threatens the lives of other fish, sea turtles and sea birds. In 2006, Whitty began work with a scientific crew searching for clues to the origins of life in the depths of the ocean.

A lovely, soft-spoken book about the “joy, inspiration, wonder, laughter, ideas” that come from relating to Earth’s “nonhuman world.”