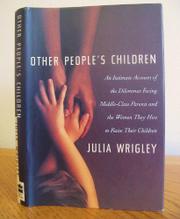 An examination of the friction that often arises between parents and the caregivers they entrust with their children. Drawing on more than 150 interviews conducted in Los Angeles and New York, Wrigley (Sociology/City Univ. of New York; Class Politics and Public Schools, not reviewed) focuses on the inevitable social gulf that exists between upper-middle-class parents and the child-care workers they hire. Only a small minority of caregivers (often college students) have middle-class backgrounds; most are from poor Third World countries such as El Salvador, Mexico, and the Caribbean islands. Because of the educational, social, and economic chasm between employer and employee, the author argues, child care is often embedded in ``a relationship of inequality'' that frequently has a negative impact on the concern the caregivers—as social subordinates—offer the children in their charge. There are many reasons why employers hire people so different from themselves, states Wrigley. Immigrants are often willing to work for relatively low wages and are prepared to take on housework duties in addition to childrearing tasks. They can't be counted on, however, to be ``stimulating and educational'' substitute parents; many do not even speak English. The author points out that parents who opt for ``class peers'' over immigrants have merely taken on a different set of problems: These caregivers do not perceive their role as subordinate, and their employers often don't know how to integrate them into the household; struggles to establish boundaries are inevitable. Wrigley concludes that high-quality, accessible day care is a viable option that can better meet the needs of most parents and their children. Serviceable, but this rather drab account would have been livelier if Wrigley had included some anecdotes and quoted more from first-person narratives.