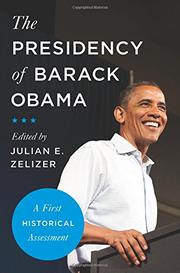 THE PRESIDENCY OF BARACK OBAMA

Historians ring in on Barack Obama’s achievements, failures, and legacy.

CNN political analyst Zelizer (History and Public Affairs/Princeton Univ.; The Fierce Urgency of Now: Lyndon Johnson, Congress, and the Battle for the Great Society, 2015, etc.) calls upon a distinguished roster of historians to evaluate Obama’s presidency. The words “frustration” and “fragility” recur in many essays that consider Obama’s actions regarding inequality, the environment, education, urban problems, immigration, race, terrorism, and foreign policy. Although all contributors agree that Obama is “an intellectual pragmatist” who embraced Democrats’ “fundamental liberal traditions,” many see a “defining paradox” in his leadership: “he turned out to be a very effective policymaker but not a tremendously successful party builder.” His programs “did little to strengthen the standing of Democrats as a whole,” which contributed to Hillary Clinton’s loss in 2016. Many essayists cite Republican opposition, especially by tea party conservatives, which led Obama to “start with a compromise, in the hope of sealing an early bipartisan deal.” That strategy frustrated liberals and, in the end, frustrated Obama, as well, since Republican recalcitrance proved insurmountable. In some areas—the environment, for example—Obama resorted to executive actions, which Princeton senior researcher Meg Jacobs asserts “will probably prove a thin reed upon which to build a lasting legacy.” In foreign policy, according to University of Texas historian Jeremi Suri, Obama “offered a liberal internationalist vision—emphasizing multilateralism, negotiation, and disarmament” that is likely to be undone by Donald Trump. In a disturbing essay on Obama’s policy on terrorism, University of California historian Kathryn Olmsted reveals the controversial use of targeted drones to assassinate alleged terrorists “rather than capture and interrogate them.” The targeted killing program, she adds, “produced profits for defense contractors” and won “fervent” Congressional support. Bigotry dogged Obama throughout his presidency, including “birthers” who challenged his “legitimacy to occupy the Oval Office,” accusing him of being African and Muslim; widely disseminated images showed him as a witch doctor and chimpanzee.

BURNING DOWN THE HOUSE
by Julian E. Zelizer
Nonfiction

THE FIERCE URGENCY OF NOW
by Julian E. Zelizer
Nonfiction