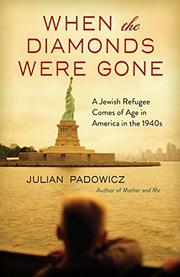 WHEN THE DIAMONDS WERE GONE

A Jewish Refugee Comes of Age in America in the 1940s

Padowicz (A Scandal in Venice, 2013, etc.) adds the memoir of his years as a refugee in the United States to his earlier works about his and his mother’s escape from Poland during World War II.

The author recounts one of the most difficult periods in any life: getting through school. Doomed from the beginning, he began in a French school in Warsaw, followed by a Brazilian school before coming to New York. Padowicz couldn’t speak the language of any school he attended, and he possessed only rudimentary English when he started fourth grade at boarding school in 1942. With only the headmaster’s wife to tutor him, he slowly picked up the language, but his difficulty focusing and finishing reading assignments would be lifelong challenges. Only his writing and storytelling talent got him through, as his popular Kip and Amanda books now attest. Padowicz speaks kindly of his mother and her admonitions to succeed and, above all, tell no one that he was Jewish. His best times and spurts of normalcy were holidays staying with his aunt and uncle, the caricaturist, Arthur Szyk, in New Canaan, Connecticut. Eventually, Padowicz’s mother married a Frenchman, Pierre, and they moved to Montreal. A normal family life was not to be, and his mother’s visits, now fewer and further between, invariably included suggestions, even bribes, that he get a nose job. It was not until college that he finally discovered his only weapon was a threat to join a temple. The author’s accounts of his school days are fairly predictable, and his family life was nearly nonexistent. His one relationship, in the end, was long and unsatisfactory. He has dealt with his mother as most neglected children do, always loving and hoping, ever disappointed.

A sad and curious memoir that will make others with unhappy childhoods know they’re not alone.