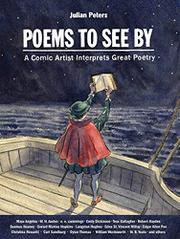 POEMS TO SEE BY

Visual adaptations of 24 short poems mostly from the 19th and 20th centuries.

Graphic artist Peters (Stairs Appear in a Hole Outside of Town, 2014, etc.) has thematically arranged the content in quartets so that, for instance, Emily Dickinson’s “Hope Is a Thing With Feathers” and Maya Angelou’s “Caged Bird” (with two others) appear under “Seeing Yourself,” and Edgar Allen Poe’s wonderfully morbid “Annabel Lee” joins three others about “Seeing Death.” Siegfried Sassoon’s “Before the Battle” is set in the World War I trenches, but Percy Bysshe Shelley’s “Ozymandias” is just one of several in which different eras flicker past (in this case, a masked gunman brandishes an Islamic State group flag in one late panel), and some, such as “Caged Bird” and Langston Hughes’ “Juke Box Love Song,” are montages or abstractions. The selections likewise encompass a range of moods and media, from a twinkly black-and-white manga version of W.B. Yeats’ “When You Are Old” to poignant watercolor scenes illustrating Robert Hayden’s “Those Winter Sundays.” The text is easy to follow, even when incorporated into the art, and the poems are reprinted at the end of each piece. The only serious misstep is the inclusion of Carl Sandburg’s “Buffalo Dusk,” with its hopelessly simplistic line, “Those who saw the buffaloes are gone”—compounded by images of ghostly Native Americans on horseback by a modern highway.