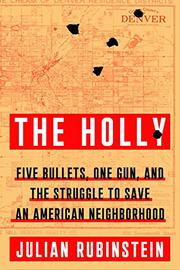 Five Bullets, One Gun, and the Struggle To Save an American Neighborhood

Journalist Rubinstein tells the haunting story of a former gang member who tried to go straight and ran into a skein of political, philanthropic, and law enforcement interests.

When Ernestine Boyd, a grandchild of slaves, fled to Denver from the Jim Crow South, she became one of the first Black residents of the Northeast Park Hill part of the city, which included the Holly, a neighborhood that would earn a reputation as “the proud center of the city’s civil rights movement.” Decades later, Boyd’s grandson Terrance Roberts left his own mark on the Holly. He had found God and quit the Bloods while in prison; after his release, he founded an anti-gang nonprofit that led the mayor to name him “one of Denver’s 150 Unsung Heroes.” Roberts’ standing in the city began to unravel when, at a rally marking the opening of a Boys & Girls Club in the Holly, he shot a member of the Bloods who had credibly threatened him. In a multigenerational saga that builds toward a suspenseful courtroom drama centered on Roberts’ trial for assault and attempted murder, Rubinstein—who grew up and still resides in Denver—creates a historical palimpsest that sets its events against the backdrop of broad social and political changes, including the Crips’ and Bloods’ spread from Los Angeles to Denver; the Clinton administration’s decision to treat street gangs as “organized crime” groups; and the often clashing aims of politicians, philanthropists, and Black leaders. The author offers especially sharp and well-developed scrutiny of the use of active gang members as confidential police informants, but this important book is about more than dubious policing. A larger theme is how difficult it is for gang members to go straight while their former partners in crime still have the power to harm them, the problem a Denver activist chillingly summed up in a Chinese proverb: “He who mounts the tiger can never get off.”

A true-crime tale vividly portrays a Denver hidden by picturesque vistas of its snow-capped mountains.