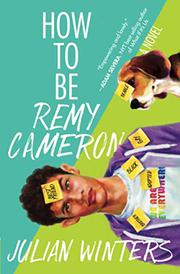 HOW TO BE REMY CAMERON

A gay high schooler contends with romance, college, and racial/sexual self-acceptance in this entertaining coming-of-age dramedy.

Remy Cameron is determined not to have a relationship this year. After the heartbreak of his last breakup, all he wants is to do well in AP Lit, get into Emory’s Creative Writing Program, and avoid anything remotely resembling love. Remy’s best-laid plans are thrown into chaos when Ian Park, a Korean American senior, moves back from California and comes onto his radar. Add to that some friends wanting to increase LGBTQ representation on the homecoming court and his lit teacher’s assigning an essay about what identity defines him, and Remy’s junior year is set to be anything but peaceful. In his sophomore novel, Winters (Running With Lions, 2018) fills a Georgia high school with characters so rich and realistic that readers might expect to bump into them in the school hallways. The racial and sexual diversity that pervades this novel feels refreshingly authentic, and Remy’s struggles with being black, adopted, and gay demonstrate the author’s skill as a storyteller and his respect for the weight of the issues at play. The relationships among the members of the mixed-race Cameron family (Remy’s parents are white) and between Remy and his friends are nuanced and reflect a hopeful future for America.

An endearing novel that gives hope to those who know what it’s like being different.