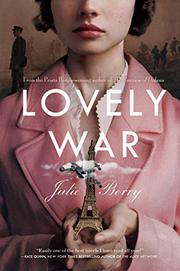 Love’s enduring power faces off against the horrors of war in this sumptuous Greek mythology–inspired romantic page-turner.

In a Manhattan hotel on the eve of World War II, Hephaestus catches his wife, Aphrodite, in a compromising position with his brother Ares. To exonerate herself of the crime of adultery, she weaves an intricate tale of mortal love during wartime that demonstrates the endurance of the human spirit. Vacillating between the present and the past, the goddess’s narrative centers on Aubrey, an African American musician; Colette, a Belgian singer; Hazel, a wide-eyed British pianist; and her paramour, James, an aspiring architect (the latter three are white), who are all brought together by happenstance during the First World War. The resulting interweaving story is an epic of Shakespearean emotional depth and arresting visual imagery that nonetheless demonstrates the racism and sexism of the period. Scheherazade has nothing on Berry (The Emperor’s Ostrich, 2017, etc.), whose acute eye for detail renders the glittering lights of Paris as dreamlike in their beauty as the soul-sucking trenches on the French front are nightmarishly real. The mortal characters are all vibrant, original, and authentic, but none is more captivating than the goddess of love herself, who teaches her husband that love is an art form worthy of respect and admiration.

An unforgettable romance so Olympian in scope, human at its core, and lyrical in its prose that it must be divinely inspired.