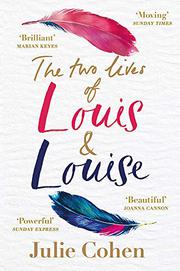 THE TWO LIVES OF LOUIS & LOUISE

In 1978, a baby is born to Peggy and Irving Alder in the little paper mill town of Casablanca, Maine. In one universe, the baby is a girl named Louise; in a parallel one, a boy named Louis. Apart from gender, the two kids are exactly alike. They share “eye color, hair color, the curve of their smile, myopia, a mole on their thigh, a propensity to hay fever, their future love for salty food and science fiction.” But the difference in gender means a difference in the way they're treated by those around them, including their best friends, twins Allie and Benny, and thus in the way their lives unfold. Cohen (Together, 2017, etc.) jumps nimbly between the two stories, starting with a brief section on the characters' childhoods and then leaping to 2010, when Louise is a single mother working as a teacher in New York and Louis, on the edge of leaving a troubled marriage, has just finished writing his first novel. Both are bisexual, and both head back to Casablanca when they learn that their mother is dying of cancer. There, they come to terms with the differing events that led them to leave the town precipitously just after high school graduation. While the book's dialogue can be stilted and its plot occasionally melodramatic, Cohen explores her premise with curiosity and the kind of openness that recognizes that both those identified as male and those as female are limited by restrictive gender definitions. As compelling as the premise is, this is never simply a novel of ideas but a story about particular people in a specific place and time. Especially intriguing and carefully worked out are the Lous' relationships with Allie and Benny, with some aspects of those relationships shaped by gender and others transcending it.