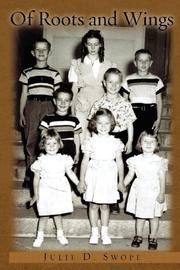 OF ROOTS AND WINGS

A memoir of abuse and recovery that’s not for the faint of heart.

When Swope, one of eight children born to an alcoholic father and a mentally ill mother, was 23 months old, she and her siblings were removed from their parents’ care and sent to a Catholic orphanage. Because of the range in ages, the siblings were largely kept in different divisions. At the orphanage, Swope was sexually abused by the mother superior and frequently berated for her behavior. At 4, she and her younger sister, who didn’t speak, were adopted by a wealthy family. There, Swope was molested by the groundskeeper and, separately, by his wife, as well as, it’s implied, Swope’s adoptive father, a physician who brings the children to watch him perform autopsies and allows them to drink beer, which he prefers they drink instead of Coke. The abuse continues throughout her life, leading Swope to experience frequent flashbacks as an adult, although she eventually starts therapy and seems, by the end of the memoir, to have established a stable family life for herself. Lurid details abound, but the most disturbing aspects are the disaffected narrative tone and the fact that not much is made out of the frequent psychological torment that parallels the physical and sexual abuse. For example, after she’s caught masturbating and soiling herself in the orphanage, the mother superior forces Swope to wear red socks to differentiate her from the other children, since Swope is “a creature from the devil.” The other children were told to ignore her; a girl was beaten after she helped Swope when she tripped and fell. “Thus I learned that Mother superior [sic] proved to be inferior,” Swope writes in a neat summation that doesn’t seem to be nearly a strong enough indictment against a woman who also sexually abused the young girl. There’s little explanation of Swope’s methodology. Based on the somewhat unrealistic dialogue (“Someone’s been messing with her” doesn’t sound like a medical professional’s assessment of a child who’s been molested) and the fact that the memoir begins when Swope was not quite 2 years old, readers might wonder what, beyond memories, Swope used as source material. Did she keep a journal growing up? Did she gain access to her own records and medical files? Greater insight would help illuminate the frustratingly opaque sections.

A bleak, affecting portrait of an unhappy family.