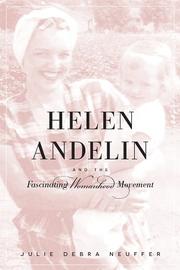 Neuffer offers a study of Helen Andelin, author and founder of the controversial Fascinating Womanhood movement in the 1960s and ’70s.

In 1961, discontented Mormon housewife Andelin discovered a set of advice booklets written in the 1920s. Called The Secrets of Fascinating Womanhood, they advised women to fulfill traditional gender roles in order to find happiness in love and motherhood. Andelin credited them with saving her marriage, so much so that she repackaged them as Fascinating Womanhood, a book that went on to sell 2 million copies (as Neuffer notes, Andelin never admitted to copying the booklets). Andelin and her movement became cultural phenomena of the 1960s and ’70s, a counterbalance to the second-wave feminism of Betty Friedan. Despite harsh criticism from many of her contemporaries, Andelin’s ideas would shape succeeding generations of female commentators, including Phyllis Schlafly, Laura Schlessinger, and comedian Rosanne Barr (who appropriated, albeit satirically, Andelin’s ideal of the “Domestic Goddess” for her stand-up routine). Neuffer demonstrates how “the views and goals of both Andelin and her FW movement were both more complex and more distinct than her critics conceded. Moreover, they endured. In fact, Andelin built a substantial and lasting following simply by addressing the immediate, felt needs of many women at a crucial moment in history when other reform movements did not.” Raised in the Mormon Southwest during the height of the movement—her mother was, for a time, a teacher of FW classes—Neuffer was granted unprecedented access to Andelin in the last decade of her life; in addition to Andelin’s personal papers, Neuffer’s interviews with Andelin make up the bulk of the book’s sources. While Neuffer is appropriately skeptical of Andelin’s teachings (and willing to present evidence that suggests Andelin plagiarized most of her material), she treats her subject with patience and respect as she attempts to accurately describe the deeper causes and effects of Andelin’s career. “An understanding of Andelin’s wide appeal as both a religious and political leader can augment the fast-expanding discussion about women’s strategies to cope with—and shape—political and social change,” she writes. Indeed, Andelin’s story has much to teach us about dissenting voices in the pursuit of progress.

A fascinating study of an icon and the era that created her.