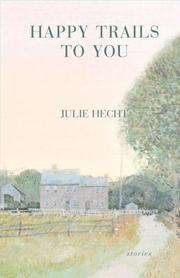 HAPPY TRAILS TO YOU

Hecht (The Unprofessionals, 2003) uses an unnamed first-person narrator to give continuity to the stories, most of which are set in Nantucket. Although there are occasional allusions to a husband and siblings, the narrator concentrates almost exclusively on the seemingly inconsequential but sprightly details of her personal life. We know, for example, that she is a fierce vegan who disapproves of the sous chef of the local café throwing, as she describes it, animal parts onto a grill. In addition, she has a swooning admiration for Paul McCartney and admits she’s looking for someone just like him—“a vegetarian, musician, animalrights [sic] activist, and garden lover who [lives] in the countryside of [a] civilized country.” It’s clear that she does not think of America as all that civilized, as allusions to the “Alfred E. Neuman” president and his penchant for saying “nucular” make clear. (“Will this never be corrected or brought to the attention of the world?” she wonders.) It’s hard to pick a favorite here, for all the stories are both stark and guileful. In “Being and Nothingness” we meet her psychiatrist, never much help because “he remained a shy, stammering, befuddled person”—though she also cunningly speculates that this might be “just an act he used to control people and get whatever he wanted.” The titular story is a tour de force in which a charming but inept interviewer has extended phone conversations with the narrator, revealing far more about himself than he should.

Hecht shows herself to be a master of both shrewd observation and wistful longing.